MOSAIC has been RELEASED on Dec 6, 2019 on the CENTAUR Label!

This is a wonderful collaboration of family, friends and history, and a tribute to my late Stepfather, Guttorn Otto.

By some coincidental and unplanned magic, the CD was released worldwide on what would have been Otto’s 100th Birthday!

In February of 2018 I hit the studio with Cellist Kirk Starkey and Pianist Linda Ippolito for this “Passion Project”, and was so delighted that they agreed to collaborate on with me!

With my Stepfather’s Cello, expertly and caringly played by Kirk, and my wonderful cousin Adi’s wife Linda, we have now recorded and Mastered Andre Previn’s ’4 Songs’ for Soprano, Cello, and Piano, along with his Vocalise ~ these are hauntingly beautiful pieces of music set to the startlingly raw poetry of Toni Morrison. We have successfully recorded and our soft launch is on!  You can order a copy of the CD, or find it for Download or Streaming on iTunes, Amazon, Spotify and more!

A video was shot while I was in Greece this past summer, for the Vocalise.  My vision for this was to present a Greek Goddess who was beckoning to the Gods and Elements, in ancient times.  We chose the location of Cape Tenaro, at the southernmost tip of the Peloponnesos Region, in Mani ~ this area has a Death Temple for Poseidon and nearby, a Roman mosaic dating back to Before Christ ~ the CD is fittingly entitled MOSAIC.   The text of the Four Songs take us on a journey and I found it to be a collection of thoughts that truly bind all of our differences together, especially that of women.

He was fierce looking, with eyebrows greying and the long hairs drooping down over his eyes, making me think of a hawk or an eagle, vision that misses nothing. He was certainly handsome in his younger years, and those looks were still there, in a weathered way.
While he looked rough around the edges, he liked to speak of politics, philosophy, art and music; long conversations wore on and I was not permitted to speak, as children should be seen and not heard. The roughness, though, spoke outwardly in many ways. His style of dress, a rope to hold up his pants, a woolen hat pulled carelessly over his head, a ratty sweater with paint on it, all smelling of turpentine. A jalopy of a car, everything 'makeshift'. 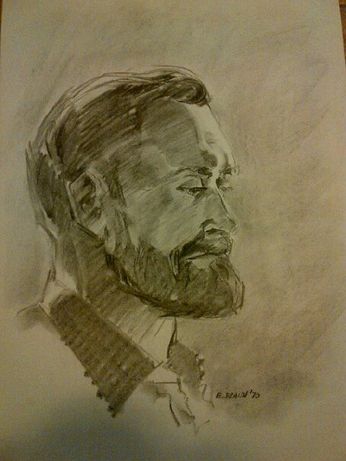 Preferring rubber boots to most anything else, out he would go into the fields and be gone for hours, tending to his garden, and then, settling in on a homemade wheelbarrow with his knapsack, and finding a subject to paint. He could find inspiration anywhere; daisies, trees, sunsets, and still life ....but sunflowers were his favourite. 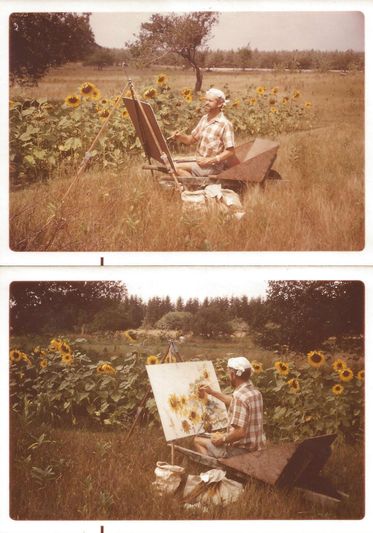 The rough edges were not laziness nor were they slovenliness, but rather, his way of simply not expressing ego, as he was more concerned with what he would create, than what he himself looked like. There was no time to fuss over details when there was daylight to paint by. In the evenings, it was candlelight, the candles stuck haphazardly to the tray on his rustic easel. Utilitarian in every way, he knew how to tie knots, tighten tarpaulins, fix a roof, drive a boat, but more importantly, to play a cello, and render the beauty of nature in spectacular ways with his brushes and spatula.

Our living arrangements were unique ~ the house was owned with a partner, a reclusive fellow who lived in an apartment on the ground floor, with his elderly mother. The front room was the studio, where all the music happened and the painting too. On the second floor, there were many rooms; a shared bathroom split into two spaces, one for the toilet (a true water closet) and one with a tub and sink, a shared kitchen and dining room, and then 3 separate bedrooms down the hall. Theirs was the front bedroom, mine the second one, and a young lady who was in University at the time lived in the room next to me. Upstairs, still more rooms with various tenants, all kinds, all creeds, different needs.

I would venture in and visit, seeing things that made my eyes wide... bookcases full of Greek and Latin texts, paintings of women with three breasts, one individual with a squirrel for a pet. So trusting of each of these people because they lived with us, yet who were they, really? I was so very lucky they were kind to me. How very fortunate to be exposed to people from all walks of life and be considered a sister, a child of their own, a friend. Many hours were spent and much was learned this way.

Fortunate too, to not only live in the city, but to have not one, but three cottages to go to. Every weekend it seemed, we would trundle off to one or the other place. Ballantrae, Parry Sound, or Hollow Lake. Each property offered something different ~ a farm and apple orchard where I would climb the trees....a 100 acre piece of land with a barn and its own lake where I would venture by myself for hours, swinging in the barn, eating wild raspberries... friends would visit and we were all nude, the German way it seemed, to just be free together, swimming in the lake. The best place was Hollow Lake though, which we could only get to by boat. Everyone else had a modern looking fibreglass racing boat with big inboard engines and ours was a wooden boat, with an outboard motor, and with those tarpaulins strapped down perfectly, we bumped across the lake for an hour before reaching the cabin. There, we would wander in the woods, looking at mushrooms and puffballs, dipping sticks covered in pine sap into the lake and watching the rainbows ripple out and away...

Sometimes, people give us gifts and we never know that we have received a gift, until it is too late to say Thank You. 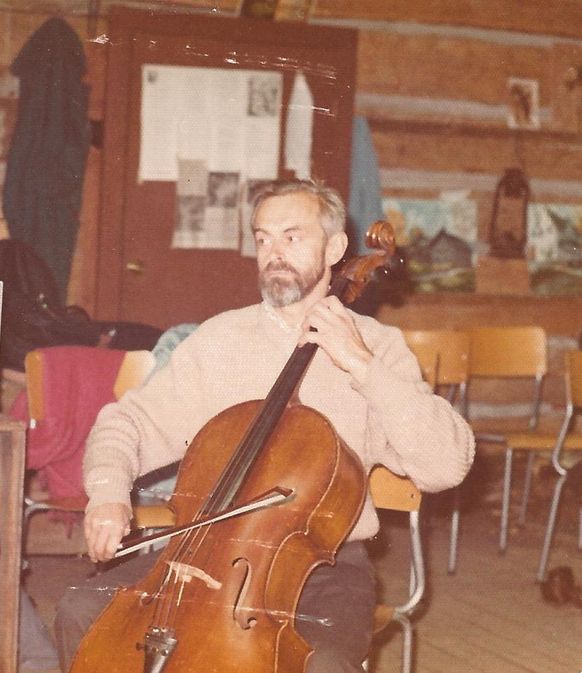 Guttorn Otto’s Cello has been restored and is lovingly cared for and played by Kirk.   I heard the sounds of this very cello when I was growing up in Tori’s household, and I was influenced greatly by his passion for music, art, nature, and philosophy.   You can read more about the cello here, in an Article from the Cambridge Times.

Linda's illustrious career in Law has been 30+ years now...but did you know she actually started out as a pianist!   Somehow she has accomplished both, brilliantly.   Have a read about her story, and triumphs here!